Pass the Chips and Dip! Snacking and the Super Bowl

For the second year, SNAC International, the international trade association for the snack industry, examined just how many snacks Americans purchased for the Super Bowl. “The Super Bowl is primetime for the entire snack industry. Our members, including snack producers and their suppliers prepare for this monumental snacking holiday months in advance,” said Elizabeth Avery, President & CEO, SNAC International.  “Across the country each year, Americans gather around a party spread highlighted by their favorite snacks. SNAC member companies are proud to play such an integral part in the fun and celebration.” The week leading up to the Super Bowl is huge for the snack marketers, with sales spiking as shoppers sprint to the snack aisle.  Snacking is a year-round habit and an increasingly important part of consumers’ lifestyles.  But year after year in terms of snack sales and consumption, only the 4th of July can compete with the Big Game. Last year we reported on just how many snacks Americans purchased during the week leading up to Super Bowl Sunday: in 2017, shoppers bought over $370 million worth of savory snacks.  In 2018, Americans topped that number, buying over $387 million worth of snacks, representing a 4.6% increase from the previous year. The categories with the highest growth surges due to Super Bowl party shopping in 2018: 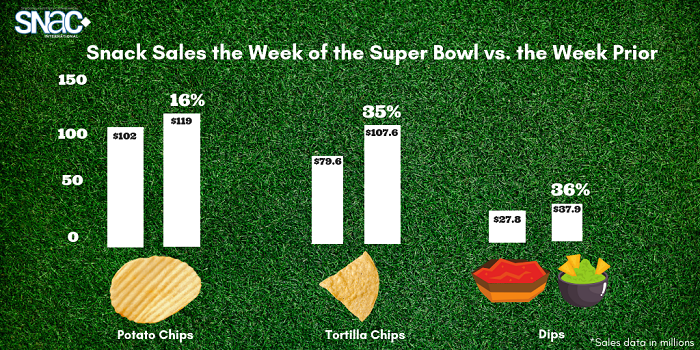 Snack sales by category, 2 weeks before Super Bowl versus week of Super Bowl:

Consumers purchased even more snacks in 2018 than in 2017

Looking at the week prior to the Super Bowl each of the last two years, potato chip sales increased by 2.6% from 2017 to 2018, from $116 million to $119 million. Tortilla chips grew by nearly 3%, from $104 million to $107 million.  Dips grew a moderate 1% from the year prior, selling for over $37.5 million, and total savory snacks grew an impressive 4.3%. Snack producers continue to grow sales beyond already historically high marks.

A Long Drive: For the Big Game last year, Americans purchased the equivalent of enough 18 oz. tortilla chip bags to stretch across the U.S. 2.5 times!

Trucking the competition: Each of the last two years, Americans purchased enough savory snacks to max out over 1,000 18-wheel trucks (over 80 million pounds).  Of all categories, potato chips sold the most, with over 55 million units sold for over $119 million.

Stay tuned to find out whether snack producers can continue to grow Super Bowl sales for a third straight year.

*All sales figures according to IRI. All estimations approximate.